#6: Meeting with eFounders and Roundtable 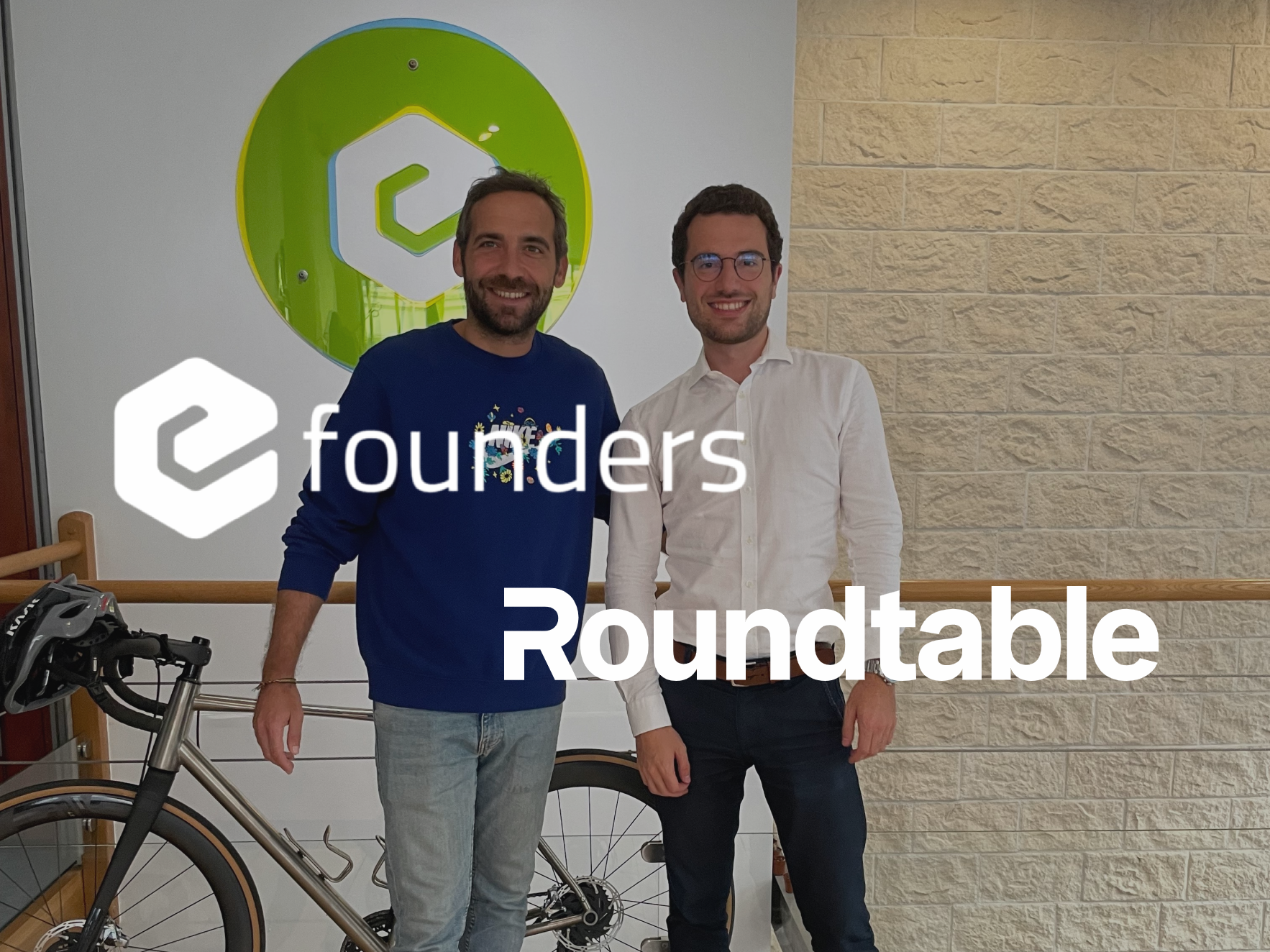 Aircall, Spendesk, Front... these scale-ups all have one thing in common: they were born in the eFounders startup studio. Located in the 9th arrondissement of Paris, this mythical place opened its doors to us to discover a little more about its activity NoCode in the company of the founder of the startup Roundtable (ef21) and the Head of Product of eFounders.

From NoCode in the startup studio eFounders, a pleasant surprise!

The eFounders studio was born 10 years ago, founded by Quentin Nickmans and Thibaud Elzière. At eFounders, there is no real playbook of entrepreneurship, but rather a handcrafted vision of scale-ups creation with the ambition to become, for most of them, future unicorns leader on their vertical business.

The eFounders core team is composed of senior profiles in all aspects of business creation and accompanies projects during their seed phase.

Note that a box is incorporated at eFounders only once the first funds are raised.

Among the startups supported by eFounders, two companies stand out: Collective.work and Roundtable because they use or have used a NoCode strategy in their creation phase. Today, we meet Julien from the startup Roundtable to talk about his journey and the use of NoCode in his company.

Focus on Julien Fissette, co-founder and CPO of Roundtable.
Following a 6-year experience in a consulting firm in a team specialized in data science, Julien wanted to create his company with Evan Testa, his partner currently CEO of Roundtable. Their idea: to democratize investment in private markets. In their search for funding, they approached the eFounders studio, which at the time was working internally on a similar project, led by Thibaud Elzière, the studio's founder. Today, the Roundtable team benefits from all the Product, Business, Legal, HR and Support support of eFounders' core teams to help the project grow.

Roundtable is a marketplace aimed at democratizing investment in private markets; it is a social investment network.

The first value axis of Roundtable consists in allowing business angels to place their own capital and to invite their community to co-invest with them. Roundtable seeks to push the community aspect via the platform.

The second is to facilitate the creation of a common investment vehicle that calls in the funds of all co-investors and generates all contractual and administrative documents.

Since the launch in the summer of 2022, there have been more than 30 deals made on the platform for projects funded between 25K and 2.5 million euros.

We discussed the tools and vision NoCode of the eFounders studio in general, and the specific context of the Roundtable startup in a second step.

Initially at eFounders, there was no culture NoCode. However, the absence of a CTO or tech team in some project teams gradually prompted the core team to consider NoCode.

Indeed, when there is no CTO in an eFounders project team (because all projects have a vocation to have one), NoCode is the right choice. Moreover, the NoCode is all the more justified for marketplace type projects where the value brought by the use of the service is not dependent on the UX of the product.

For projects where the value of the project lies in the final user experience (e.g. the Kairn project management platform), then NoCode is more difficult to consider.

Gregoire qualifies his comments by talking about the Bubble technology because he places this tool NoCode apart in the ecosystem and does not have enough experience with it.

Having said that, Gregory's vision of NoCode has evolved since the Collective.work project, because for him, NoCode was originally associated only with landing pages or static content.

According to him, in order to optimize the implementation of a project NoCode, it is preferable to have a good web and database culture to be able to create something coherent. Having a technical background is a gas pedal.

Moreover, NoCode technologies are evolving rapidly and the ability to deliver high-performance end-user interfaces NoCode very close to the experiences obtained with traditional technologies should see the light of day in the next few years according to Grégoire.

In the context of Roundtable, the use of NoCode was beneficial to validate the project's value proposition as quickly as possible in addition to compensating for the lack of a technical profile in the initial team. Roundtable is the second project afterCollective.work to have used NoCode at eFounders. Looking back, Julien confides that the use of NoCode greatly facilitated the iteration phase of the end-user process and operations, particularly with the creation of the investment vehicle.

Concretely, the NoCode at Roundtable has been used to create and iterate 2 application parts (front and back-office):

1. A Webflow client onboarding was created to introduce the project and encourage users to complete and submit a complex Typeform. Make was also used to collect the information and dispatch it to an Airtable database to store/sort the information. To smooth out the UX, the Stacker tool was used to create a more customized admin panel. This allowed Roundtable teams to quickly and easily track allocations and records in the launch phase. V1 was created in about 10 days, with iterative phases based on field feedback. This first use-case was developed with the objective of being taken over by a code approach after the launch.

2. After collecting the investment commitments in the front-office, the investment vehicle has to be generated and created in the back-office. The direct consequence is the significant amount of time required to complete the contractual paperwork and documentation (status, AGM minutes, shareholder agreement...). The Roundtable team has standardized this part by creating templates of statutes validated by the market and has used NoCode to automate the filling of these documents. For these papers, it is today 400 variables that are auto-generated via Airtable. Without NoCode , it would take about fifteen hours to fill out a file. With NoCode, it takes only 15 seconds. Thus, this automation allows Roundtable teams to save significant time in the administrative creation of investment vehicles and drastically limit human errors. At this time, automation is not intended to be replaced by code.

According to Gregoire, the main difficulty in setting up this infrastructure NoCode was to connect all the tools together, some of which were more or less compatible.

A complementary vision to the code approach, to free the potential for experimentation of startups

Historically, NoCode at eFounders was reserved for internal use by startups (as part of operations automation) or the creation of disposable MVPs in a vocation to resume development with a traditional approach. One reason for this is that the success of many SaaS eFounders products depends on a highly evolved UX/UI experience that is not compatible with development NoCode. That said, according to Gregoire, this reasoning is not necessarily valid anymore with technologies like Bubble, not to mention the very fast performance evolutions of NoCode technologies in general. The studio is thus in regular watch in order to follow the evolutions of the tools.

Will a future eFounders unicorn ever be created exclusively with NoCode technologies?

Also, more and more Sales and Marketing use-cases are appearing in eFounders' startups for which the NoCode approach brings concrete and quick solutions (for example a Webflow connected with a Hubspot).

As for Julien and his long term vision of NoCode at Roundtable, he thinks he will one day leave NoCode if the product gains in complexity and in automation variables because it will be more and more complex to test. Above all, his vision is to use NoCode to quickly test ideas with the ambition behind to bring everything back to code, for new products or new features.

"The NoCode is not the goal, it's more the means" according to Julien. It's an ideal way to test opportunities. Julien wishes to maintain a culture of experimentation through NoCode in his scaling phase.

Thanks again to Grégoire from eFounders and Julien from the startup Roundtable for sharing their feedback on NoCode. Exciting use-cases that demonstrate the interest of NoCode in an innovative product launch phase as well as the ability to scale operations with automation tools.